Manuka honey is a type of honey native to New Zealand. It’s produced by bees who pollinate the flower Leptospermum scoparium, commonly known as the manuka bush.

Manuka honey’s antibacterial properties are what set it apart from traditional honey. Methylglyoxal is its active ingredient and likely responsible for these antibacterial effects. Additionally, manuka honey has antiviral, anti-inflammatory and antioxidant benefits. In fact, it has traditionally been used for wound healing, soothing sore throats, preventing tooth decay and improving digestive issues. 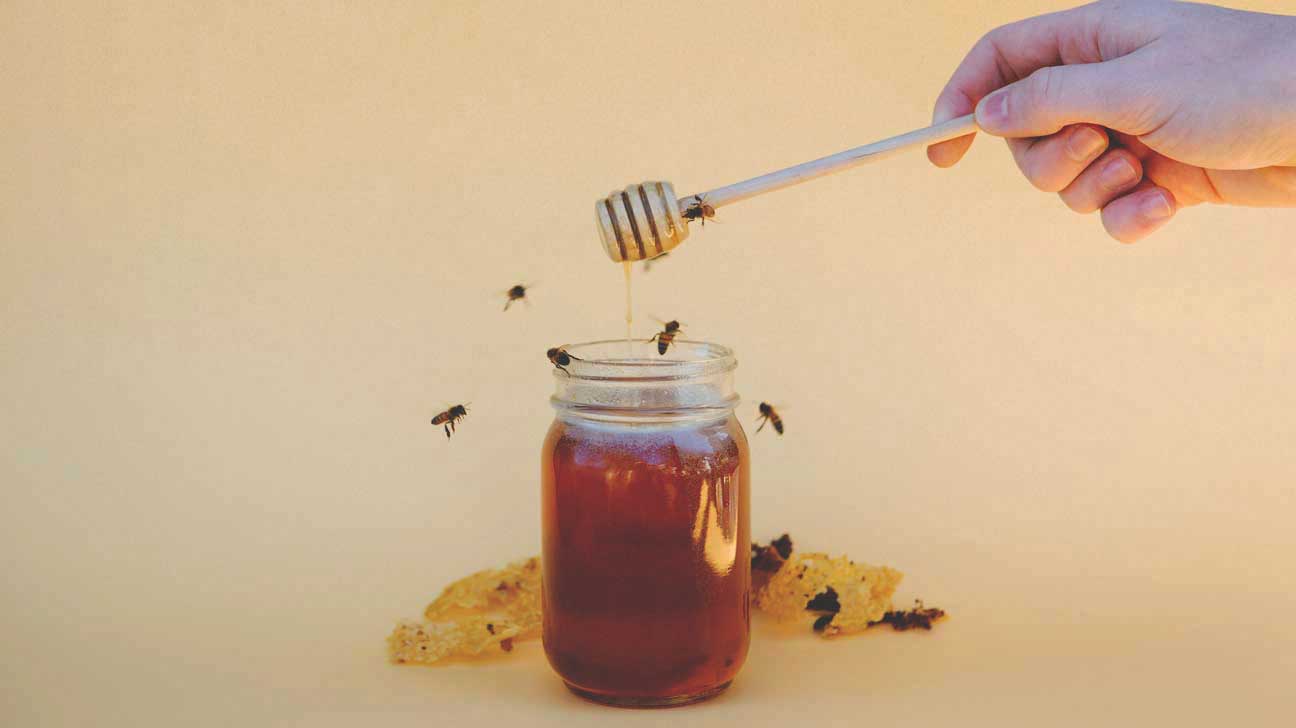 Since ancient times, honey has been used to treat wounds, burns, sores and boils (1)..

In 2007, manuka honey was approved by the US FDA as an option for wound treatment (2).

Honey offers antibacterial and antioxidant properties, all while maintaining a moist wound environment and protective barrier, which prevents microbial infections in the wound.

Multiple studies have shown that manuka honey can enhance wound healing, amplify the regeneration of tissue and even decrease pain in patients suffering from burns (3, 4).

For example, one two-week study investigated the effects of applying a manuka honey dressing on 40 people with non-healing wounds.

The results showed that 88% of the wounds decreased in size. Moreover, it helped create an acidic wound environment, which favors wound healing (5).

Lastly, manuka honey has been shown to treat wound infections caused by antibiotic-resistant strains, such as Staphylococcus aureus (MRSA) (9, 10).

Hence, the regular topical application of manuka honey on wounds and infections may help prevent MRSA (11).

Applied topically, manuka honey effectively treats burns, ulcers and non-healing wounds. It has also been shown to combat antibiotic-resistant strains of infections, such as MRSA.

According to the CDC, almost 50% of Americans have some form of periodontal disease.

To avoid tooth decay and keep your gums healthy, it is important to minimize bad oral bacteria that can cause plaque formation.

It’s also important not to totally wipe out the good oral bacteria that is responsible for keeping your mouth healthy.

Specifically, research has shown that manuka honey with a high antibacterial activity is effective at inhibiting the growth of harmful oral bacterias like P. gingivalis and A. actinomycetemcomitans (12, 13).

One study examined the effects of chewing or sucking on a honey chew on the reduction of plaque and gingivitis. The honey chew was made of manuka honey and similar to a chewy honey candy.

After their three daily meals, participants were instructed to either chew or suck on the honey chew for 10 minutes or chew a sugar-free gum.

The honey-chew group showed a significant reduction in plaque and gingival bleeding, compared to those who chewed the sugar-free gum (14).

The idea of consuming honey for good oral health may seem counterintuitive, as you have probably been told that consuming too many sweets can lead to cavities.

However, unlike candy and refined sugar, manuka honey’s potent antibacterial effects make it unlikely to contribute to cavities or tooth decay.

Research shows manuka honey inhibits the growth of harmful oral bacteria that can cause gingivitis and tooth decay. Unlike refined sugar, it has not been shown to cause tooth decay.

If you are suffering from a sore throat, manuka honey may help provide some relief.

Its antiviral and antibacterial properties can reduce inflammation and attack the bacteria that cause pain.

Not only does manuka honey attack harmful bacteria, it also coats the inner lining of the throat for a soothing effect.

A recent study in patients undergoing chemotherapy treatment for head and neck cancer observed the effects of consuming manuka honey on Streptococcus mutans, a type of bacteria responsible for sore throats.

Moreover, manuka honey decreases harmful oral bacteria that causes mucositis, a common side effect of radiation and chemotherapy. Mucositis results in inflammation and painful ulcerations of the mucous membranes lining the esophagus and digestive tract (16).

For quite some time, various types of honey have been touted as natural cough suppressants.

In fact, one study found honey was as effective as a common cough suppressant (17).

Although manuka honey wasn’t used in this study, it’s likely to be just as effective at suppressing coughs.

Stomach ulcers are one of the most common illnesses affecting humans (18).

They are sores that form on the lining of the stomach, causing stomach pain, nausea and bloating.

H. pylori is a common type of bacteria that is responsible for the majority of gastric ulcers.

For example, a test-tube study examined its effects on biopsies of gastric ulcers caused by H. pylori. The results were positive and implied that manuka honey is a useful antibacterial agent against H. pylori (19).

However, a small two-week study in 12 individuals who took 1 tablespoon of manuka honey by mouth daily showed that it did not decrease H. pylori bacteria (20).

Gastric ulcers can also be caused by excessive alcohol consumption.

Manuka honey has been proven to improve antioxidant status and reduce inflammation in rats with both IBS and ulcerative colitis, a type of irritable bowel disease (21).

It has also been shown to attack strains of Clostridium difficile.

Clostridium difficile, often called C. diff, is a type of bacterial infection that causes severe diarrhea and inflammation of the bowel.

C. diff is commonly treated with antibiotics. However, a recent study observed the effectiveness of manuka honey on C. diff strains.

It is important to note that the above studies observed manuka honey’s influence on bacterial infections in rat and test-tube studies.

Further research is needed to come to a full conclusion regarding its influence on bacterial infections of the bowel.

Manuka honey may decrease inflammation in individuals with IBS. It may also be effective at attacking C. diff.

6. May Treat Symptoms of Cystic Fibrosis

Cystic fibrosis is an inherited disorder that damages the lungs and can also affect the digestive system and other organs.

It affects the cells that produce mucus, causing mucus to be abnormally thick and sticky. This thick mucus clogs airways and ducts, making it difficult to breathe.

Unfortunately, upper respiratory infections are quite common in people with cystic fibrosis.

Manuka honey has been shown to fight bacteria that cause upper respiratory infections.

Pseudomonas aeruginosa and Burkholderia spp. are two common bacteria that can cause serious upper respiratory infections, especially in vulnerable populations.

One study observed the effectiveness of manuka honey against these bacteria in people with cystic fibrosis.

Results indicated that it inhibits their growth and works in conjunction with antibiotic treatment (23).

Therefore, researchers concluded that manuka honey may play an important role in treating upper respiratory infections, especially in those with cystic fibrosis.

Manuka honey has been shown to attack harmful bacteria that cause upper respiratory infections in individuals with cystic fibrosis, but further studies are needed.

Acne is usually caused by hormonal changes, but it can also be a reaction to poor diet, stress or bacteria growth in clogged pores.

The antimicrobial activity of manuka honey, when used in combination with a low-pH product, is often marketed to fight acne.

Manuka honey could help keep your skin free of bacteria, which could expedite the acne healing process.

Also, given its anti-inflammatory properties, manuka honey is said to decrease inflammation associated with acne.

Yet, there is very limited research on manuka honey’s ability to treat acne.

However, one study investigated the effects of manuka honey, which possesses properties that are comparable to manuka honey, on acne. It found that kanuka honey was as effective as antibacterial soap at improving acne (24).